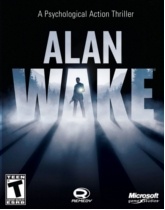 “That said however, Alan Wake is still an incredibly well put together package. From a technical stand point the game is perhaps a year or two outdated and it’s hard to see where more than five years of development time really went to, but as an overall experience Alan Wake transcends the importance of such issues. The story is amongst the most compelling I’ve ever played and the game is a shining example of how linearity can work when driven by a strong narrative. For that particular decision at least, Remedy can be justly proud.”

Alan Wake is a game that has never done things the easy way. Starting life as an open world adventure but streamlined into a linear narrative late on, at the same time as being pulled from its original home on PC altogether, Alan Wake’s 5 years in development have not gone smoothly. By the time the game was ready for launch, it was thrown into a busy mid-May period to stand on its own two feet alongside Blur, Split/Second and Red Dead Redemption; the latest Rockstar monolith to sell by the millions and “suck the oxygen” out of the market for everything else in it’s path.

The results aren’t pretty. As at the time of writing, Wake has not sold well at all, shifting 145,000 in its opening two weeks on sale. Although not terrible, such numbers will come as a disappointment for a much marketed and long awaited exclusive release, and certainly don’t look encouraging for hopes of a sequel.

Incidentally, Alan Wake is also a character who has found life equally as difficult. Although a bestselling thriller author, Wake has been hampered by a severe case of writer’s block for the past two years, barely finding the creativity to commit a single word to a page. The solution to this problem according to Alan’s wife Alice is to go on vacation and escape the strains of life in New York, and so the pair head off to Bright Falls, an idyllic and picturesque town on the American North Pacific coast. Predictably, there is more to the town than originally meets the eye. After an incident sees Alice go missing barely 10 minutes following their arrival, Wake soon finds himself blacked out behind the wheel of a crashed car, unable to remember an entire week of his life since Alice went missing and with a trail of pages from a manuscript that he can’t remember writing leading him further into danger.

Danger is in this case represented by The Taken, a small army of towns people who have become posessed by the Dark Presence, an evil force that thrives in the dark of night and causes havoc across Bright Falls. Able to appear seemingly at random, The Taken stalk Wake through the forests and woodlands that make up the area. Disposing of The Taken introduces the game’s big focal point; the use of light as a weapon. Armed with a battery powered torch in one hand and a gun in the other, Wake must use the light to first burn away the Dark Presence before he can shoot the townspeople and kill each member of The Taken permanently. Although not a totally original idea, the combination of light and regular munitions serve as an interesting deviation from the standard 3rd person shooter run ‘n’ gun fare, and visually the lighting effects are stunning. 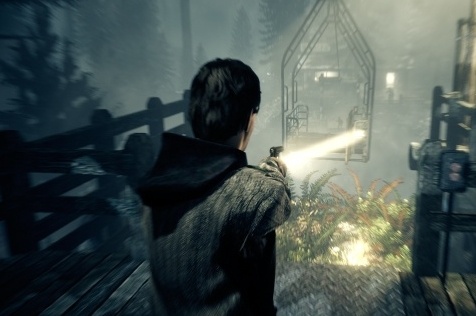 Although The Taken are slow and relatively easy to despatch, almost resembling a zombie in many respects, their threat comes in the form of numbers. The time it takes to burn away the Dark Presence that protects The Taken from your hot lead can vary depending on the size and strength of the individual, and being slowly approached and cornered by large numbers of them can lead to some incredibly tense stand offs. Should things become too much, a number of other light based weapons such as flares, flashbang grenades or a flare gun can be used to quickly despatch of multiple Taken at a time. Should either of those fail and your nerves get the better of you completely, the other alternative is to make a run for the nearest available light source; a street light or powered generator, for example. Although rare, such moments offer a welcome pause from the open and dark woodland, while also serving as safe havens that replenish any lost health and provide some short term immunity from The Taken.

The whole experience is driven by a television-drama style aesthetic. The main story arc is broken down into six individual episodes, the presentation of which I personally found to be one of Alan Wake’s greatest strengths. Each episode begins with a “Previously on Alan Wake” recap montage, replaying the key moments from the previous chapter with a running voice over from Wake himself. Episodes end at logical points, almost without exception with some sort of dramatic cliff hanger that will have you clamoring for the next chapter, whilst fading to an outro screen and a backing track of music. It sounds cheesy, and to a certain extent it is, but it also works fantastically well in context. Alan Wake’s story is genuinely one of the strongest single player narratives that I’ve experienced in some time, one that I won’t spoil here, and by utilising the Lost-esque presentation Remedy are able to deliver that narrative with a genuine level of must-see-what-happens-next drama that perhaps isn’t possible with a continuous plot. The pacing is superb and the desire to unravel the twists of the previous chapter grow stronger with every passing episode. Alan Wake will get it’s claws into you and will seldom let go until the finale.

Central to the plot are of course the cast of characters. Although the character models themselves look a little dated, unsurprisingly given the nature of the games development time, the voice acting is generally strong across the board and even minor characters are sufficiently fleshed out and believable. Curiously, Alan Wake perhaps even does a better job of portraying those with lesser roles than it does the main characters. Alice, whose rescue is central to the whole story, is particularly absent from all but a handful of scenes between the games beginning and end, and other than the fact that she is afraid of the dark (which figures… for a game in which the dark wishes to destroy everything) the player will know little about her. Wake too is unlikely to win any popularity contests, although his dull appearance and witless personality are largely kept in context with the story and counterbalanced by the supporting cast. 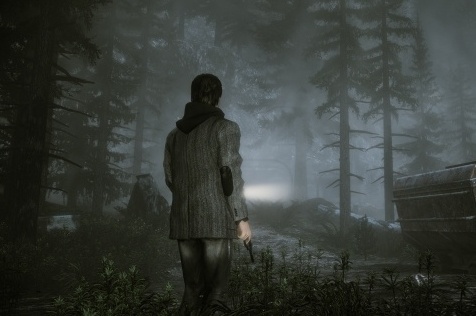 As is often the case with games of this nature though, the location of Bright Falls itself is perhaps the most crucial character of the whole piece. The forests are dark, imposing and suffocating, offering a psychological fear that is often more about what you don’t see than what you do. In the role of antagonist, the Dark Presence can surface at any time, be it in the form of The Taken or by simply tearing apart at the world around you, and this offers a constant sense of dread that is almost inescapable; save for those rare moments where natural light is a valuable commodity. Although Remedy have been criticised for turning their backs on the open world gameplay originally intended for Alan Wake, even within the confines of the new found linearity I rarely strayed from the set paths infront of me. When basked in darkness, Bright Falls is a terrifyingly eerie place. Light is a genuine comfort, one I found myself rarely wanting to leave behind in the name of exploration.

In terms of the overall presentation, Alan Wake is a superb achievement and one that defies its roots as a video game. At least most of the time. Unfortunately, there are occasional slip ups that serve as stark reminders that Alan Wake is not only a video game that started life half a console generation ago, but is also one that has brought some irritating cliches along for the ride. While the collecting of Wake’s forgotten manuscripts serves as a genuinely interesting hook for completionists, a similar quest for Coffee Thermos flasks is significantly less endearing. There are one hundred of them randomly scattered around Bright Falls, bright blue in appearance and serving no value whatsoever. It raises the age old question of why Wake would choose to collect flasks with the life of both himself and a loved one at stake in the first place, or where he’d store them in an inventory no bigger than his jacket. To put it bluntly, the Coffee flasks are irrelevant, illogical, painfully out of context and totally worthless to anyone other than Achievement hunters. For a game which takes itself so seriously as a cinematic thriller elsewhere, such a tired old cliche from the vaults of video game history feels particularly out of place.

That said however, Alan Wake is still an incredibly well put together package. From a technical stand point the game is perhaps a year or two outdated and it’s hard to see where more than five years of development time really went to, but as an overall experience Alan Wake transcends the importance of such issues. The story is amongst the most compelling I’ve ever played and the game is a shining example of how linearity can work when driven by a strong narrative. For that particular decision at least, Remedy can be justly proud.

In short, Alan Wake is a thoroughly enjoyable and engrossing adventure. Whether it be the unpopular decision to openly flaunt post-launch paid DLC, or simply the fact that it launched within the same month as a multi format title from Rockstar, Alan Wake has not been doing the business at retail; but it certainly isn’t for a lack of quality. Alan Wake deserves to do well, as do Remedy, and I can only hope that the inevitable game and bundled DLC re-release reaches a wider audience when the time comes.

I Never Liked the Place Anyway