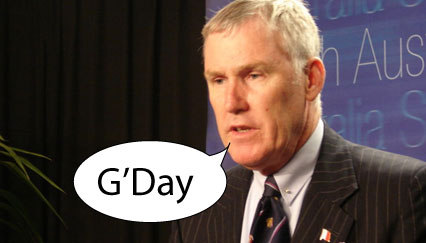 For those who don’t follow such things, a bring-you-up-to-speed: the land of Australia, which I will never visit on account of the Huntsman Spider, does not have a rating classification for “mature” games – what we in the States would call M-rated games, or what our PEGI-using friends in Grand Europa would call 18-rated, or what Australia would call R-18+ if it had such a rating, which it does not. Why not? South Australian Attorney General Michael Atkinson.

I will not do what many have been doing over the past few months and mindlessly bash Mr. Atkinson; he has a right to his position. His position being, by the way, that Australia and by extension Australian gamers do not need mature-rated games on their golden shores. He cites the usual claims of excessive violence and sexual content, mentions RapeLay (they always mention RapeLay), and belittles his countrypeople for having the filthy audacity to want games with all the stabbing and shooting.

Anyway, Atkinson is the lone holdout among attorneys general in Oz, and in so being he is singlehandedly preventing the establishment of an R-18+ rating in the country, meaning that any games that would carry such a rating are theoretically banned. We’re not talking about a lot of games here: Left 4 Dead 2 was denied classification, as was Aliens vs. Predator and various other titles. Not living in Australia (huntsman spider) I don’t know how easy or hard it is to get games that are banned. But the lack of such a rating has bothered people enough that some gamers have set up a political party and are running their own attorney general candidate against Atkinson.

So I won’t mindlessly bash Atkinson. I’ll bash gamers, who have once again demonstrated their compelling idiocy in the face of legal challenge.

Years ago I did some contract writing for a company that didn’t pay. I and maybe two dozen other writers were waiting and waiting for our checks, but none came. Through an error on the part of this client, we’d gotten hold of one another’s email addresses and were conferring on how to proceed. One writer took matters into his own hands, sending the following to the company and CC’ing us:

Fuck you fucking assholes I want my fucking money. I will sue your shit ass five ways from Friday. I have a contract. Have you ever heard of a fucking contract??? PAY ME OR I WILL FUCK YOU UP.

This was an ill-advised method of getting paid. It was childish and confrontational. Moreover, it diminished our collective position, because this dude had jumped the gun and communicated with the company without our blessing, creating the illusion that he spoke for all of us.

The more even-minded among us gently argued that a more civil, maturely-worded message, one which clearly stated our grievances and noted the existence of a legally binding document, might have been a preferable approach.

Similarly, many gamers in Australia have been resorting to characteristically puerile attacks on Atkinson. The political party Gamers4Croydon, for example, actually seems to think that running a candidate on a one-plank platform will seriously threaten Atkinson, who by all accounts is a popular attorney general who has done his job well. What has Gamers4Croydon really achieved? It’s made a mockery out of gaming as a hobby and gamers as people by creating the illusion that all gamers care about is games. Rather than establishing an Australian version of the Video Game Voters Network and simply lobbying, Gamers4Croydon decided to take over the Australian government.

Meanwhile individual gamers have been doing the usual moronic things: Atkinson claims he’s received death threats and harassing messages, while some other gamers decided that it would be a good idea to dress up as their favorite game characters and march around the Parliament building. Believe me, people, dressing up as Pikachu and shouting that games are free speech does not strengthen our position; it simply makes gamers look like socially retarded freaks.

As for the threats, well, Atkinson has veered into the melodramatic on that front. I have no doubt that gamers have threatened him, because many gamers are far stupider than you can possibly imagine (Harvey Smith received multiple death threats after Deus Ex: Invisible War), but Atkinson is now saying absurd things like he’s more afraid of gamers than he is of motorcycle gangs. And his actions prove that he takes a very narrow view of free speech – he recently attempted to legislate a fine for anyone posting to a blog or forum without revealing their full name and address.

But while I don’t agree with Atkinson’s position, I can’t help but wonder: had gamers united and politely called for mature, civil discourse on this issue – perhaps a series of public debates, or some community access cable discussions, or even an online debate – would Atkinson have refused? Moreover, such a genteel and measured approach would have granted us the opportunity to further educate Mr. Atkinson about the content of mature-rated games, something he clearly doesn’t fully understand. Instead, gamers have created a situation where they’re the bad guys, and Atkinson is gaining support all around the house.

So no, I don’t have a beef with Michael Atkinson, much as I disagree with his position, and much as I know (and he doesn’t) that his position is based on ignorance that could easily be dispelled with civil discourse on the matter. I have a beef with gamers, and not just Australian ones, because time and again as the medium struggles for approval we shoot ourselves in the foot… and the resulting blood spatter would be mature-rated.

Let’s delve back into my own past in closing, because I think we can all agree that I am a fascinating topic.

A while ago, in another iteration of this very site, I wrote an extraordinarily shitty thing about something Ubisoft genius Clint Hocking said in an interview. Not only was it a mean remark, it turns out that my source was grossly misquoting his context, something I further precipitated in my statements.

A lot of people would have ignited the flame thrower, but not Clint. He wrote me a long and gentlemanly email explaining his position, demonstrating that he’d been quoted out of context, clarifying a few things I didn’t know at all, and politely asking that I change what I said. So I did. And I told him. And he emailed me again, thanking me for the consideration.

He called me “Mr. Sakey,” not “asshole.” He tactfully explained my error. As a result I was far, far more willing to see things from his perspective. I wouldn’t have bothered making the change if he’d attacked me (he did say what I said he said, but he followed it up with context that I hadn’t seen until he explained it to me). Instead he created an environment of sympathy and discourse. He got what he wanted and I got the opportunity to apologize for an unfair assault on him.

I can’t help but wonder whether things’d be different if one gamer speaking for the whole had simply gotten in touch with Atkinson and requested the opportunity to explain gaming’s position, so the attorney general could be better educated and make a more appropriate decision.

Instead they dressed up like Pikachu and slid threatening messages under his door. Classy.

24 Responses to Down Under

When Is A Spoiler Not A Spoiler?