A question:  Does anyone know where I can find the game data files for STALKER Complete.   When I was working with the computer guy to back up important stuff from my computer,  we didn't seem to be able to find those files.  When we went to the STALKER files under THQ, they didn't have the recent dates when I had been playing.  And I didn't know where else to look.  Any suggestions?   Kay

Kay, my data files are in    C:Program FilesTHQS.T.A.L.K.E.R.-Shadow of Chernobyl

Saved Games are in    My Computer  >  Shared documents  >  STALKER-SHOC    Another way to get to saved games:

I am using XP Pro.

Your data files could be in a different location.  You could try  Start  >  Search    and make sure that you click on All files and Folders, and then click on More Advanced Options, then check Search system folders, and Search hidden files and folders and Search subfolders.

And if I'm an idiot telling you the obvious, please forgive me.  I never know what anyone else knows, so I try to offer basic info first.

Kay, for some reason this board software will not accept my back-slash.  For the data files here should be a back-slash after C:  then after Files  then after THQ

So that is the story.  I will be surprised if you have gotten here to the end.  [Image Can Not Be Found]

If you have Windows 7 the Stalker Complete files are here:

So that is the story.  I will be surprised if you have gotten here to the end.  [Image Can Not Be Found]

If you have Windows 7 the Stalker Complete files are here:

So sorry, Kay, and thanks for the correction, Scout.  If you are using Windows XP, my  Stalker Complete data files are in:

(my forward-slash works, but not my back-slash, fer cryin' out loud)

Thank you all for your suggestions.  I will go looking for the STALKER game data files tomorrow.

Kay, if you're in 7/Vista, try C:\Users\Public\Public Documents\STALKER-SHOC\savedgames. It'll be something similar to that for XP - probably somewhere in the public users/my documents folders.

Apparently they thought burying them as deep as they could in the most obscure corner of the filesystem was a wise idea.

I've searched and cannot find the answer to a question.  I know what most of the PDA map icons signify, but I don't know what the bluish circle with a house icon in it means.  Any help?

Yesterday I relayed from a save to keep the Freedom guys at the Army Warehouses from dying on me.  Got a few tasks which I completed, then went to Red Forest for a couple more tasks.  Those guys in the Forest have some good gear.

The blue circle means the next quest location I think. I forget when I don't have a HUD right in front of me to look at.

Made it to Yantar and got the quest for Lab x16. Off to snoop around there with my prototype suit. Sniping zombie Stalkers is almost relaxing after Lab x18 and the subsequent plod back across the The Wild Territory to Yantar.

Steerpike,  I found STALKER savedgames right where you said the would be.  Thanks so much.   Kay

Kay, I hope you are well.  I read about the tornado.  What a lot of freakish spring weather we've had.

Waist deep in snork-shooting raptors at the moment but shit, X16 is scary fun.

Last night I went to take out a bad Stalker for Barkeep.  I was carrying 2 long guns and a hand gun.  There were only 6 guys - the Stalker and 5 companions.  No problem normally, but both of my rifles misfired, and the hand gun was little match.  No time to reload since I was under attack.  I had to use grenades to take them out.  What a waste of rubles, but it was better than dying - again.

Loving this game.   Most of the time.

What's going on? Any progress? Report! 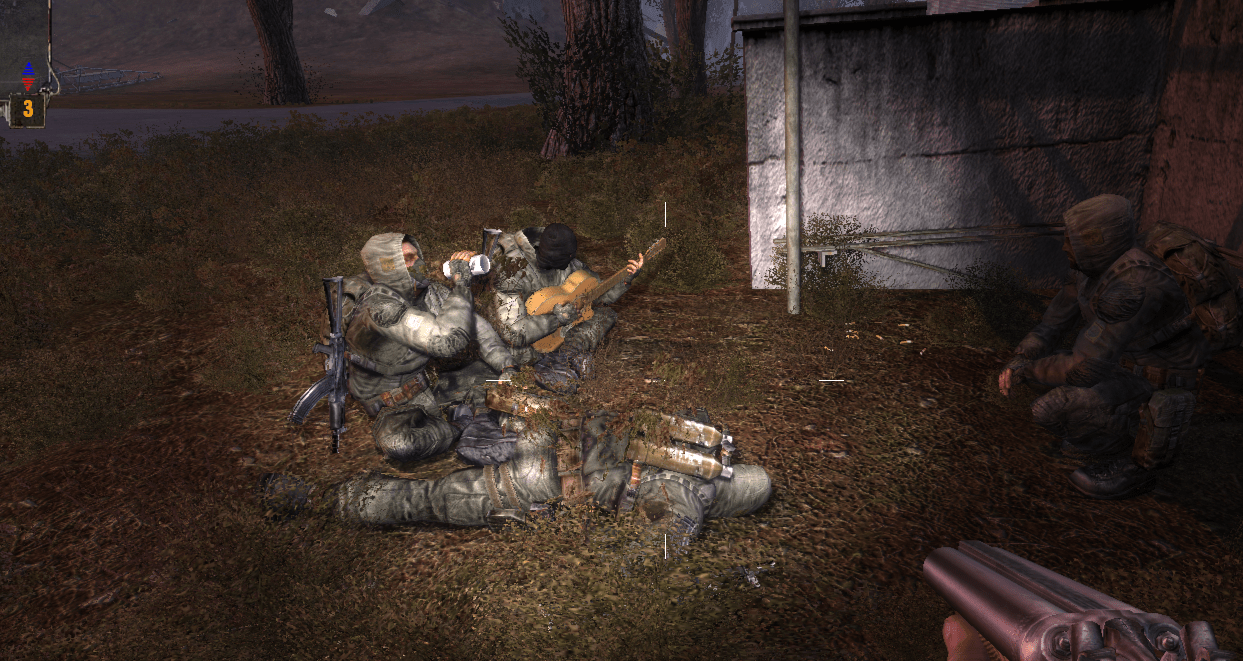 You're relaxing at a party having some cool tinned bevvies and another is playing a guitar. A fellow Stalker lie dead on the ground. Do you:

What's going on? Any progress? Report!

That looks like the bus stop at Garbage.  I, of course, "Pat the rapidly cooling body down, looking for the sausage."  And anything else of use to me.  Then I traded with the survivors.  But now they have little that I need, so I mostly ignore them.

Less playing time over the last two days than previously, but last night I shot my way through the larger complex in Dark Valley to get Borov's key.  The day before I went to the lab area SE of that, and will go back tonight now that I have the key.

I've also been to the edge of Red Forest and did a few jobs for the leader there.  That gave me lots of stuff to trade, and some animal parts to turn in for cash.

How I hated Wild Territory.  The first 2 sections are easy, but the train station area is deadly – packs, packs I say, of dogs, and bloodsuckers.  The humans are easy by comparison.  The first time I got to the site of the helicopter crash all the scientists were dead, and then the dog pack got me.  Replayed from earlier saves a few times and got the same dead-scientists result, so I gave up on them, looted what I could, got out quick, and hoped that if they had any info for me, that I'd be able to get it another way.

I've been there several times, and each time I come out with loot, loot, loot, but I use lots of supplies keeping myself safe from dogs and bloodsuckers.

As I usually do, I climbed up on anything that I could.  Found a lovely Seva suit in one building that I accessed from the roof.  Better than my Stalker, Mail, Merc, Bandit, and Wind of Freedom suits.  Looking to upgrade before I head into some really, really irradiated areas.

I'm thinking that just for a change of pace, and with a good save under my belt, I might wander into Yantar or the Red Forest just to see what sort of dangers await me.

Spike has changed her look.

But not her attitude!!!   Like Spike, the first thing I would do with that dead body is see what I could get.  I am always amazed that there are so many dead bodies around that  Stalkers haven't cleaned out.  To be honest,  I am also grateful.

Spike has changed her look.

But not her attitude!!!   Like Spike, the first thing I would do with that dead body is see what I could get.  I am always amazed that there are so many dead bodies around that  Stalkers haven't cleaned out.  To be honest,  I am also grateful.

Glad you're back, Kay.  How is Stalker going?

For an explanation of my temporary avatar, read the Your Game Space thread in Kenneth.  It started with Armand on the last page of the thread.

Just returned from Lab x18.  Scary, scary place.  I never figured I'd be threatened with death by chair, crate, or barrel.  The living things were the easiest of it.

Next morning edit:  Had to look it up.  Now I know why things were flying at me.  Thinking back, I'm not sure I could have done more than dodge and weave to avoid.

Well the answer it obvious, it's: "Serigy, that lamp, is that Prada?" Never had it fail.

I finished the X-16 lab quest, settled up with the old scientific guy, got the SPM-99 armor then wandered back to the Cordon where I talked to the Guide and got a side quest to return to the Agroprom tunnels. [Image Can Not Be Found] Oh no. I have to do it.

The main quest is pointing me to the Red Forest to deal with the Brain Scorcher but I  think I'll dawdle a bit first at Agroprom.

Also I finally got into the Duty area in Rostok/Bar and have a bunch more side quests iff'n I want them.

I was wandering around the Cordon when I ran into a mutant that sent off hallucinogenic brain waves. That was fun.

Went to see the Doctor in the Agroprom tunnels and now I'm off to the Red Forest to find the Brain Scorcher.

Most Users Ever Online: 186