I’m easily distracted by all things bright and shiny. So instead of working on the review for a game I finished two weeks ago (shhhh!), I’ve been playing Xseed’s newest game for the Nintendo DS – Avalon Code. I’ve only put in about three hours (well, really four but I restarted after playing the first hour) and I’m having a blast!

The current world is ending and you’ve been chosen to travel the world filling the Book of Prophecy with those things worthy to carry into the new world; be they people, flowers, animals or monsters. Logging entries into the book is carried out by smacking said object with a giant book (my wildest fantasies made real); which records that item’s attributes. 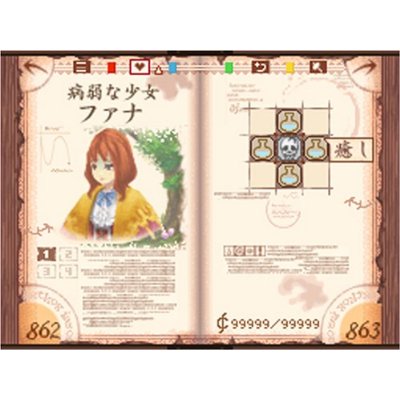 Once you’ve scanned something, you can modify its attributes – for example: the original sword I found carried the attributes rusty (ILL) and copper (ORE) . By removing the ILL attribute, I had a copper sword with improved stats. I’ve since added passion (FIRE) and now I have a flaming copper sword which does even more damage. This changing of attributes mechanic has not only given me crazy control over my weapons, but also any enemies I encounter. Changing a monster’s attribute to ILL greatly reduces their stats making them much easier to release from this mortal coil… very handy for a combat weenie like me.

Scanning has become an addiction for me. It’s incredibly fun smacking the hell out of something with that massive book (no damage is incurred, but it’s satisfying nonetheless) and then changing up the attributes. I’ve even cured a sick and dying pet – of course, I was charged with witchcraft and thrown into the castle dungeon, but sometimes sacrifices must be made!

The production values are high – lots of music and voiced dialogue. Combat is straightforward using the face buttons and the D-pad is used for movement. The stylus is used mainly to manipulate the pages of the Book, swapping out attributes, using items to regain health, etc. Dying simply results in getting pushed back to the beginning of that particular screen, so reloading is pretty much a non-issue. I haven’t turned off my DS, so I’m not sure if I’ll get the option to continue or if I’ll need to reload. 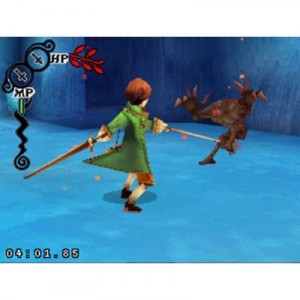 The only downsides I’ve encountered thus far: Inspecting various points on each map to reach 100% can result in rewards – which can sometimes lead to the dreaded pixel hunt – however, not all maps give up goodies. The Book interface is cumbersome and can get a little annoying; especially when you’re trying to flip through pages looking for a specific page and/or attribute. There is an index and you can bookmark a specific page, but that doesn’t always help. Luckily, the game pauses when the book is opened so at least I’m not getting hammered while trying to track down that illusive attribute.

Almost forgot, there’s a romance angle – you can choose to play as either male or female which allows you to pursue a relationship with one of the NPCs. I’ve yet to experience any of that as I’ve only just found my way out of the castle dungeon. Gimme some time, people! Now if you’ll excuse me, I need to head back into the dungeon and get back to working on that review for the other game.

3 Responses to Mists of Avalon

Do go down to the woods tonight…

The Scheme of Things