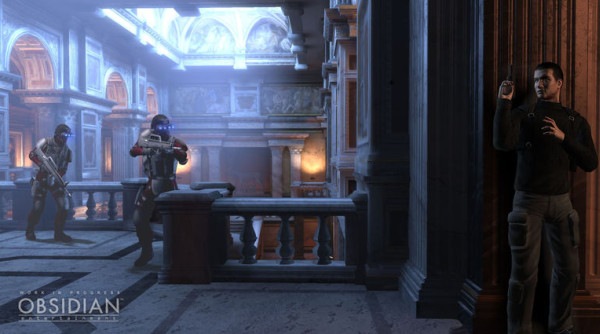 “Mike Thorton is a partially written slate. Tabula ‘kinda written but still with room for you to customizus’, if my Latin serves me right. He can’t be a sea elf, an escaped mental patient or a were-cabinet – he’s an educated, multi-lingual clandestine operative, and that rules out being a chaotic neutral Urdlen-worshipping deep gnome bard /cleric.’“

The above mentioned Mike Thornton is the player character in Obsidian’s upcoming espionage RPG, Alpha Protocol. The snappy, quippy, quotable quote is from the game’s Systems Lead, Matt MacLean and is excerpted from a November 7, 2008 interview in RPG Vault.  Alpha Protocol’s Lead Designer, Chris Avellone and Senior Producer Ryan Rucinski also sit in. It will be available for PC, Xbox 360, and PS3. Obsidian fans have been buzzing about the game for a while now and its got its own web page and a release date that is basically “sometime in the spring of 2009 if we’re lucky”.

It sounds like my kind of game. A single player RPG set in the modern day, with a character who, while  allowing for a  few tweaks is otherwise a full blown creation of the development team. I’m in full agreement with MacLean’s philosophy of character creation: “Making a character should not require a large investment of time; spend your time playing, not staring at a creation screen.”

As Michael Thorton, you play a spy, get missions that you can carry out in several different ways depending on your skill set and gameplay preferences. It looks to be a hybrid RPG/shooter, a genre that I quite selfishly hope will continue grow in popularity as it’s my favorite type of game. Stealth will play a large part in this game if you so desire and there are gadgets galore. The dialogue system is getting a lot of attention. It’s dubbed a “stance” system where you have to quickly choose your answer from a few attitude choices such as nice, aggressive, sarcastic, instead of clicking on a word-for-word block of text. There is no returning to exhaust the dialog option. Apparently the germ of the idea for the game came about when a few of the principals were watching a Jason Bourne movie and wondered what a modern day spy RPG would look like. Also Chris Avellone of Planescape Torment and KOTOR 2 fame is at the rudder.  Want to know more? Read the above linked interview and check out the web site. Now that Fallout 3 has escaped into the wild we all need a new, unreleased RPG to speculated endlessly upon.  Alpha Protocol seems as likely a candidate as any.

Side by Side: Gang Beasts, Abyss Odyssey & Season 3