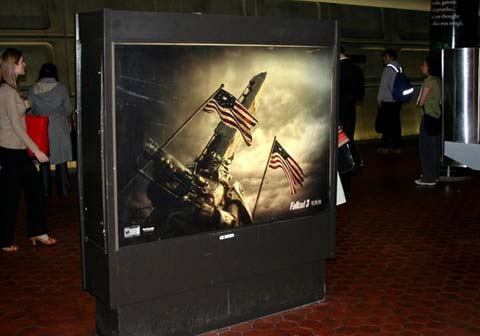 Better than "got milk" ads.

Joystiq reports that Bethesda has festooned the Washington Metro with new ads for Fallout 3, many featuring scenes of a bombed-out Washington and ominous slogans. Looks like the Bethsoft take on the classic RPG series will be as grim and goofy as its predecessor’s.

Speaking as a former ad man, I can share with you this piece of trivia: the carpet bombing of subway terminals with a single piece of advertising like this is a technique (actually one invented by my former agency) called Station Domination. It is outrageously expensive and has been known to backfire, since the most effective use of station domination is with disturbing images that don’t explicitly tell you what they’re advertising. Looks like Bethesda has gone a slightly safer route, what with the game title and ESRB rating clearly displayed on most ads. Presumably – knowing how moronic people are – they simply want to avoid another Boston Bomb Scare.

In other news, the Fallout fan site No Mutants Allowed has posted chunks of the PC Gamer Europe exclusive review of the upcoming RPG. Final score: 81%.

I must say, in this world of obsequious games journalists happily slathering perfect tens on anything that moves, an 81% is a surprisingly low number for a game we all assumed would be handed perfect scores out of the gate with no reviews at all.

We at Four Fat Chicks are a bit more objective, though, and I’m sure one of us will be happy to post our thoughts in a FFC review. I nominate Scout – his beautiful review of the original Fallout still stands as my favorite piece of writing we’ve published.