You may have noticed one of the items down in the site footer - "Tap-Repeatedly somehow got a bird in its condo and had to chase it out."

Tap-Repeatedly is me. And what had been one bird is now... four. Two of which arrived in the last 24 hours.

The first is this one, months ago: 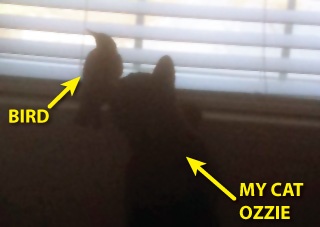 This blurry photo was taken with my iPhone 3GS, which is not much of a camera. Now, to you, it may appear that my cat there, Ozzie, is trying to defend me against the bird. Or disembowel the bird. No.

Ozzie just... wanted to be friends with the bird. I wish I'd hit "video" instead of "photo" on my phone, because not only was Ozzie completely failing in her duties as a cat, she and the bird remained pretty much in this position while I WENT DOWNSTAIRS, GOT MY PHONE, AND RETURNED TO PHOTOGRAPH IT.

Ozzie was sort of tapping on the bird's tail feathers with her paw, and the bird was only marginally irritated. "Bemused" might be a better description.

My Mom got me Ozzie and my Mom is a saint among humans, but I think we have to acknowledge that she got me THE WORST CAT IN THE WORLD.

Some months later, I came home from work and there was Ozzie to greet me, as usual, at the top of the stairs. What made this day different was the presence of another bird, squawking and batting itself against the window.

ME: Holy shit, there's a bird over there!

ME: What have you been doing all day?

Eventually I rid myself of this bird by opening the balcony door (as an exit) and chasing the bird while shouting "Ooogah booogah!" until it flew out. And peace returned to Ozzie's kingdom.

I arrive at home to a screeching, scratching sound in my furnace. As I stand there, too afraid to approach (it might explode), and Ozzie hiding upstairs, the exhaust pipe literally shat out a bird. Said bird fluttered around for quite some time before I was able to toss a blanket onto it, bag it up, and fling it out the balcony door.

Ozzie - who makes an effort to be very pantherlike most of the time, stalking and attacking my feet, my laundry,, her toys, etc - had let out a shriek and raced upstairs to hide in her closet while I did this.

Ten minutes later, flapping and squawking in the furnace.

I couldn't get it to leave the ducts.

This morning, again working from home... to the sound of flapping and squawking. Ozzie, my fierce jungle kitty, cowered trembling upstairs.

By noon I'd gotten comfortable with the idea that the bird was going to die in my ductwork and the place would smell like dead bird for several weeks. I'd done literally everything possible to get it out into the condo, where I could theoretically release it, but the bird wasn't going for it.

Then, around 3pm, I hear a myeeeeerrrrroooowwwwl from Ozzie. Sound of distress.

Why is she distressed?

[Image Can Not Be Found]

(iPhone 4? Better camera.) At last, it found its way out of my HVAC system.

I think that's the same bird as the one from yesterday. It is! I recognize those blue markings around its face.

ME: Look, bird. I freed you once. Get the fuck out and stop coming in through my furnace.

ME: Bird. Do you see this thing in my hand? This is a hockey stick.

My condo people are sending a roof person over tomorrow, to look at my furnace ducts and screen them off.

In the interim, I have access to one (1) Common Michigan Grackle, in a state of unliving. This item is available for sale.

This is how HItchcock's The Birds began you know...

Because I am innovative, I took an old pillowcase and attached it to the furnace exhaust pipe that's been pooping birds recently. Now, should one invade, it'll be pre-bagged! So when I get home, I can just undo the clothespin, take the pillowcase out onto the balcony, and beat it against the wall.

My new iPhone takes a much prettier picture, though, doesn't it?! Also, the instant I got it I said, "Siri, find me a whore," and she honestly came back with "I can't find any escort services near you."

Most Users Ever Online: 186